Having completed his primary and secondary education (gymnasium) in the city of Vinkovci, he enrolled in the University of Zagreb, where he switched between studies in mechanical engineering, architecture, the history of literature, and art history. He finally found his true calling in art, and in 1940 began studies in sculpture at the Academy of Fine Arts in Zagreb. There he studied for two years each under professors Ivo Lozica and Fran Kršinić. Upon completing his studies in sculpture, he took up a specialized study of printmaking with professor Tomislav Krizman, and at the same time enrolled in the painting class of professor Marin Tartaglia. In 1948 he completed his studies at the Academy, with degrees in both sculpture and painting.

He exhibited his work for the first time as a painter in 1948, as part of the Fourth Exhibition of the Croatian Association of Visual Artists. His first solo exhibition then took place in 1951 in Vinkovci, where he also presented only his paintings.

In 1953 he started teaching art to elementary school children at the Teacher Training College in Zagreb, and collected his teaching experiences in a 1959 book, Children Drawing (Djeca crtaju). Soon thereafter, in the early 1960s, he became a member of the faculty at the Academy of Fine Arts in Zagreb.

Of the many trips in Europe that Ružić took in the 1950s, a few made a lasting impression on him: Tarquinia in Italy, Lascaux in France, Stonehenge, and the studio of Henry Moore in England. These visits brought him closer to sculpture, and set him on a path to explore the source of artistic form. He reached a turning point in 1956, the year he completed his sculpture Father (Otac)—it marked the beginning of his career as a sculptor. “I can divide my whole working life into two parts: searching for a path, and walking on that path” said Ružić. “That took place in two separate stages, before and after 1956. I entered the second part of my life with Father. When I discovered for myself that I had to make something up, and not only observe, I was overwhelmed with joy. Hundreds of sculptures [were made] in the first year of this path, and later came a multitude of works using different materials. Here I mean moving to working with cement, metal, stone and wood, with which I stayed to this day.”

Ružić presented his first solo exhibition of sculptures in 1959 at the Croatian Association of Visual Artists in Zagreb. This was the beginning of his life as a sculptor: numerous exhibitions followed for Ružić (both solo and group), as did participation at national and international sculpture symposiums.

In 1964 Ružić was one of three artists to represent Yugoslavia at the thirty-second Venice Biennale, where he received the David E. Bright Foundation Award for sculpture. This was a unique success for a Yugoslavian sculptor, one that had never happened before or since. Such internatiomal recognition opened the door to more national and international projects.

With his increasing notoriety both in Croatia and abroad, Ružić would be commissioned to construct public monuments across Europe. In Germany, for example, these include A Miracle in Milan (in Fallersleben), Fountain with Birds (in Wolfsburg), and The Round Table (in Braunschweig). In former Yugoslavia, he constructed the Monument to Moša Pijade (Spomenik Moši Pijadi) in Belgrade (1969), and in Sarajevo he worked on the interior of the Church of the Holy Cross (1981). During this time he also established long-standing collaborations with marble manufacturers Henraux from Querceta (Italy) and Naturstein-Billen in Wolfsburg.

On the other side of the Atlantic, his sculpture River Boat (Korablja) was displayed in front of the Yugoslavian pavilion at the 1967 EXPO in Montreal. Upon its return to Zagreb, it was permanently placed in the atrium of the City Hall of Zagreb. And of course, Ružić’s sculptures adorn numerous open spaces around Croatia: on the main square in Osijek stands his sculpture People (Ljudi, 1977); in Vinkovci Slavonian Folk Dance (Kolo, 1978); and in Zagreb Monument to the Fallen in Zagreb 1941-1945 (Spomenik palim Zagrepčanima 1941-1945, 1981), in Dotrščina park. His sculpture Cat (Mačka, 1986) was posthumously placed on a promenade at the bank of the Sava river in Zagreb.

In 1985 he received the “Vladimir Nazor” award for lifetime achievement.

After a car accident in 1988 Ružić started working in papier-mâché. As he put it: “There was a big accident and I was lying in bed, immobile, for six months. I was imagining what I was going to work on when I got better, because I am always filled with an inner energy and with ideas, which impel me to work. I couldn’t work with wood while lying in bed because it was too heavy, so I moved to a lighter material. It’s like when prisoners, lacking real material, make something out of bread. And when one begins to work with paper, one finds one’s ‘paper language.’ Paper has a hundred languages! I started speaking a hundred languages completely by accident.” Even after his time in the hospital, Ružić continued to work with papier-mâché, and displayed many of these works at subsequent exhibitions.

At the beginning of the 1990s, in the Karas gallery in Zagreb, Ružić presented for the first time his works in yet another material – textile. These were made in collaboration with his wife Julija and are all signed as “BJR” (Branko Julija Ružić). “This is how it started,” Ružić explained: “In 1983 my body had been damaged, and my health had started to suffer. After the first surgery I took months to recover physically, and I was distraught that I couldn’t work. My wife Julija gave me the suggestion: try to draw something and I will create it with a needle. That’s how it started. And there it was, the most beautiful and intimate addition to my life, which pulled me through all my hardships and which served as a bridge that carried me from nothing into a new existence. The body woke up, and our collaborative work continues until this day.”

In 1993 Ružić donated over 300 of his works, and over 200 works of his contemporaries, to the city of his birth, Slavonski Brod. Gallery Ružić and Contemporaries (Galerija Ružić i suvremenici) is situated at the “Fortress Brod” and was opened to the public in 2004. It is the second largest collection of late 20th century art in Croatia, and is a testimony to the status Ružić enjoyed in the art world in Croatia, and amongst his contemporaries and friends. 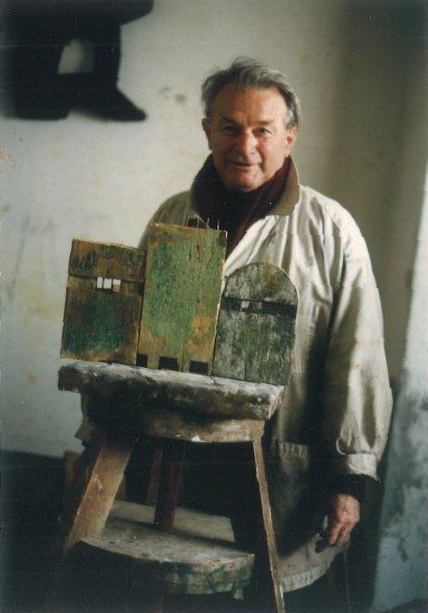